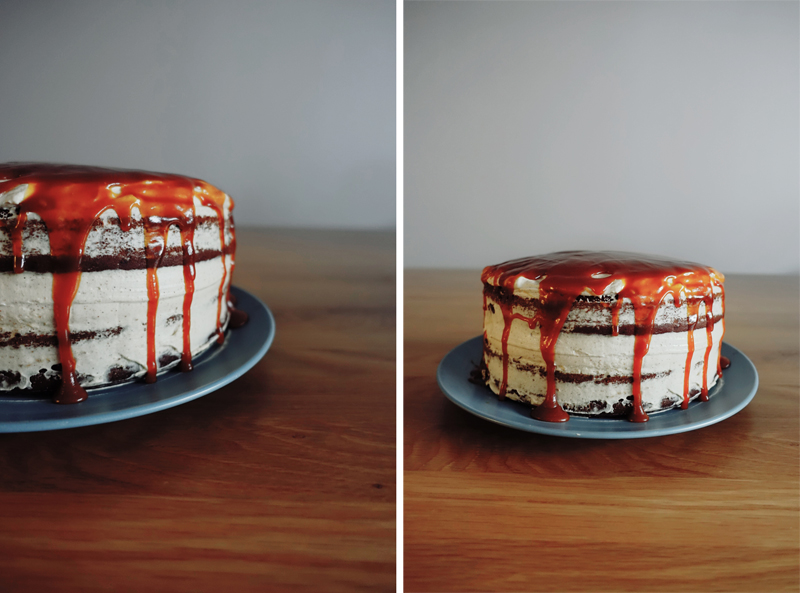 This Spiced Rum & Raisin Chocolate Naked Cake becomes decadent with a slathering of richly spiced cream cheese frosting (spiked with yet more rum!) and a salted rum caramel. Make this one your next weekend baking project.

Soak raisins in a small bowl with rum overnight. Drain, reserving the precious rum. Blitz the raisins in a food processor until smooth-ish. Grease and line two 18cm springform cake tins. Preheat a fan-forced oven to 160°c. Beat the butter, sugar and vanilla together until pale. Add the eggs, one at a time, until just combined. Reduce mixer speed to low. Sift flour and cocoa into another bowl. Add a third of the flour mixture to the butter mixture, alternating with 1/2 cup of buttermilk and repeat until combined. Add raisins and mix until just combined. Divide the batter evenly between prepared pans. Bake for 50 minutes or until a skewer inserted into the centre comes out nearly clean. Cool the cakes in their pans for 10 minutes then transfer to wire racks to cool completely. Place in the fridge for 10 minutes before icing them.

Make a salted rum caramel by combining 3/4 cup caster sugar and two tablespoons of water in a small saucepan over medium heat. Bring to a simmer, without stirring, and cook until golden; about 7 minutes. Add cream (carefully, it may sputter) and a generous pinch of salt and stir until smooth. Add two tablespoons of the rum that you soaked the raisins in and set the caramel aside to cool completely.

To make the spiced cream cheese frosting, place cream cheese and butter in the bowl of a stand mixer. Mix until light and fluffy. Gradually add icing sugar, 1 tablespoon of your raisin rum, cinnamon and nutmeg until combined.

Top one cake with one third of the icing. Top with the other cake. Spread sides of the cake thinly with icing and the top generously. Scrape excess icing off the sides for a “naked cake” look. Place in the fridge for ten minutes to chill. Drizzle the top with rum caramel letting it drip down the sides.

Serve slices of cake with little glasses of any remaining raisin-infused rum on the side. And perhaps homemade rum and raisin ice-cream on the side if you want to die happy. 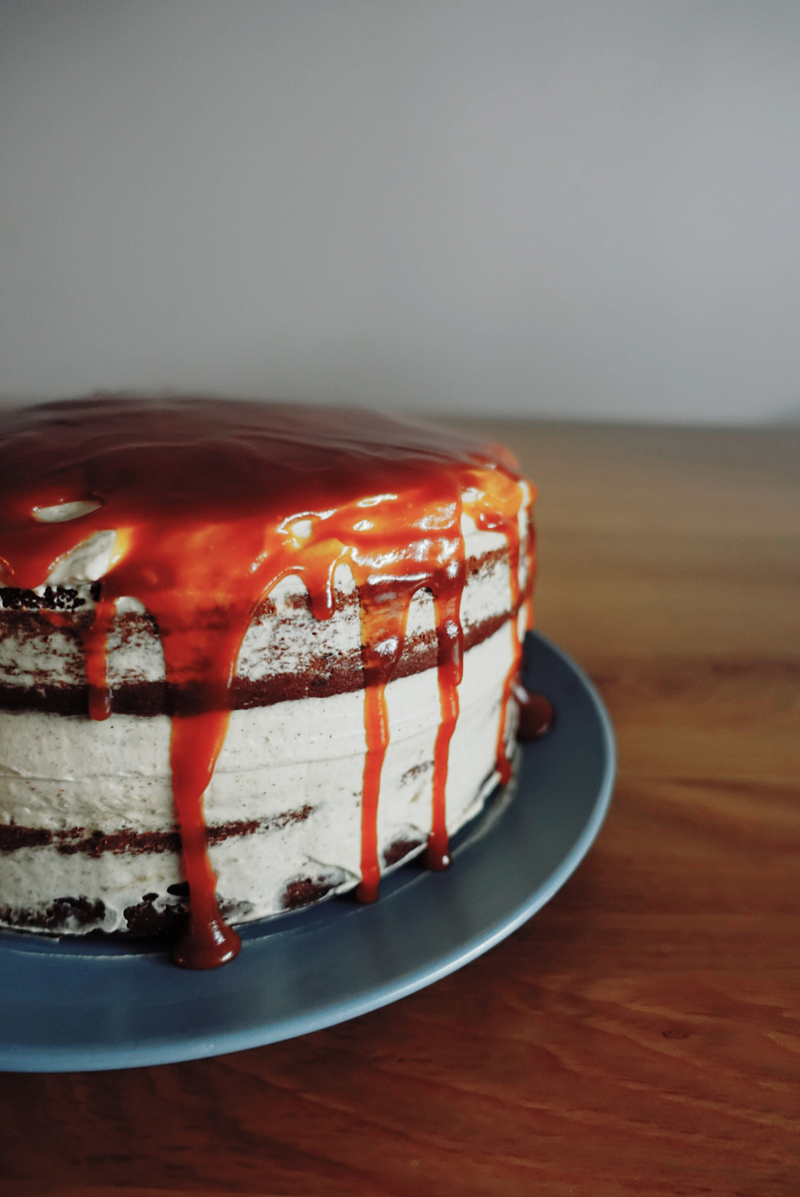 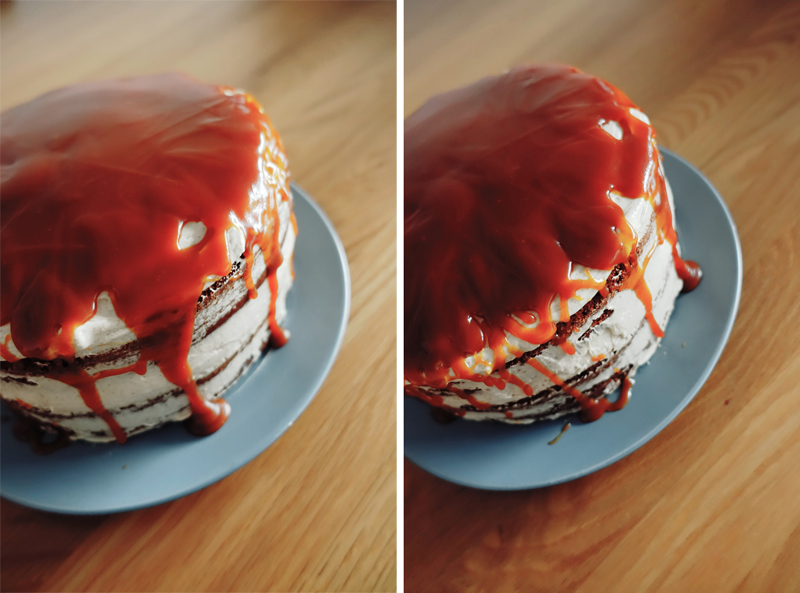 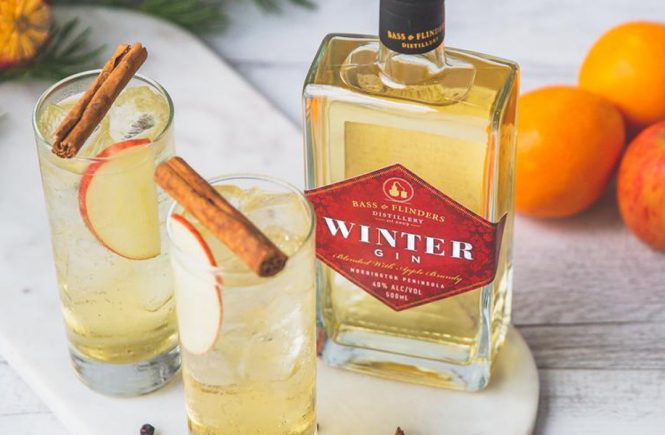 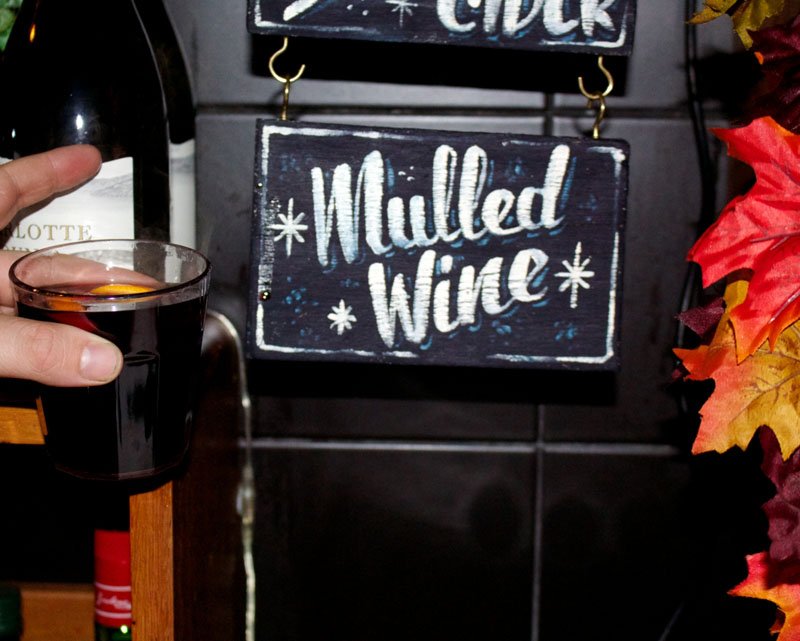